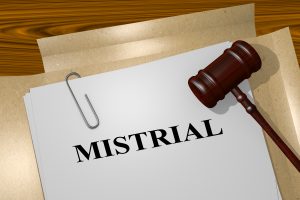 The Sixth Amendment of the U.S. Constitution assures that every defendant facing criminal charges has the right to a public trial (At Bond James Bond, we always recommend that defendants avoid awaiting trial in jail). But what happens when a jury is unable to reach a verdict in a criminal case? And do defendants in such cases always face retrial? To answer these questions, let’s take a quick look at how the system works.

How Many Criminal Cases Reach Court?

In the U.S., 9 of 10 criminal trials never even reach the trial stage. This can happen for several possible reasons—the most common being that the defendant agrees to a plea deal rather than risk receiving a harsher sentence at trial. Another reason a case might not make it to trial is that the prosecution’s evaluation of the facts reveals insufficient evidence to pursue the case. Prosecutors will often move to dismiss a weak case rather than lose in court. Also, new evidence (such as another person confessing to the crime) can sometimes result in a prosecution being abandoned prior to trial.

If a case does go to trial, it may be decided by a judge alone or by a jury operating under a judge’s guidance. Trials presided over by a judge alone are called “bench trials,” while those decided by a jury are appropriately called “jury trials.” Generally, jury trials are reserved for defendants whose offenses could result in significant jail time (over 6 months). For this reason, most misdemeanor cases do not receive jury trials, while the majority of felonies do.

What Is a Mistrial?

A mistrial occurs when a jury fails to reach a verdict on a case. Deadlocked (or “hung”) juries are usually not declared until the empaneled jury has had a chance to review and debate the facts of a case thoroughly. And even when a jury announces that it is unable to arrive at a verdict, a judge may instruct the jurors to continue their discussions in hopes that the minority view can be pushed toward consensus. Even so, about 6% of jury trials end in a mistrial, with jurors unable to agree on the defendant’s guilt or innocence.

What Happens after a Mistrial?

If a jury becomes hopelessly deadlocked over a case and remains unable to reach consensus, the judge may choose to declare a mistrial. After a mistrial has been declared, the prosecution must decide whether they intend to pursue the case, or drop it. Prosecutors may drop a case if they believe a second trial will end in an acquittal or a second hung jury. If the prosecutor does decide to pursue the case further, he/she must say so before a judge so that a new trial date can be set and a second jury impanelled. Similarly, if the prosecution intends to drop the case, they must declare this also, so the defendant may be freed.

The Fifth Amendment of the U.S. Constitution provides that no defendant should be “subject for the same offense to be twice put in jeopardy.” This rule was put in place to prevent prosecutors from repeatedly leveling the same charge against an individual. So how do retrials get around the “double jeopardy” clause? In a sense, they don’t. Since the first case was never decided either in guilt or innocence, prosecutors may choose to pursue the case until it reaches a conclusion. If that happens, and the defendant is acquitted, prosecutors may NOT bring the same charges against the defendant again. So, in essence, the aim of a retrial is to definitively conclude the original proceedings.

At Bond James Bond, we work with clients daily to help them navigate the often-confusing legal system. If you or a loved one has been arrested and charged with a crime, we can help. Our experienced bond agents can help secure pretrial release and can help ensure that defendants meet their scheduled court appearances. Don’t miss out of work and family obligations while awaiting trial. Contact Bond James Bond today!