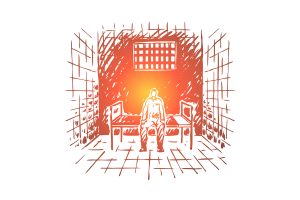 For over a century, U.S. jails have followed a classification system that separates males from females, adults from juveniles, and sentenced from pre-sentenced arrestees. Overcrowding and other factors (such as the rise in gang-related crime) have forced many jail systems to add new layers of classification based on an arrestee’s history. While these distinctions vary from jurisdiction to jurisdiction, often depending on prevailing approaches jail management, the process does have some common characteristics. Let’s take a closer look.

Intake and booking mark the first point of contact and evaluation between jail staff and arrestees. Most new arrestees are placed in one or several holding cells, depending on the size of the facility. All arrestees are searched and relieved of personal property, photographed, and fingerprinted. The intake staff uses this period to gain important information on a detainee’s history—including gang affiliation (if applicable), history of violent offenses, and mental health history—to help them determine where the detainee should be placed.

This phase of classification typically begins after an arrestee is held for arraignment. Those who are able to make bail quickly (usually within 4­–8 hours of booking) do not typically go through this phase of classification. The remainder, however, must have a formal custody assessment. Staff members use available records, as well as information obtained from the arrest report and initial screening, to perform their evaluation. Larger facilities may have a dedicated classification unit for this purpose.

In addition to the basic classification criteria that separate males from females, adults from juveniles, and pre- from post-trial inmates, this phase of classification also looks at other characteristics.

To make these classification decisions, staff members rely largely on personal interviews with individual inmates. This information is used to develop a housing assignment for each inmate. Within the larger categories of male/female, adult/juvenile, and pretrial/post-sentencing segregation, some facilities also add other layers of classification, often grouping inmates of similar age or cultural background together.

At Bond James Bond we understand the importance of pretrial release to help defendants meet family and work obligations while awaiting trial. That’s why we work with each client to help secure their release and to ensure that they meet all court-mandated appearances. Contact Bond James Bond today, and discover how our licensed and experienced bond agents can help.