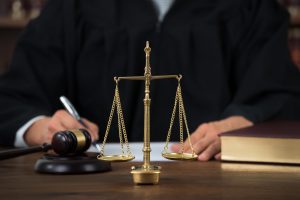 If this is your first encounter with the criminal justice system in the state of Georgia, some of the routine protocols and procedures might seem confusing. One common question is, “Will my bail be set by a magistrate or a judge?” To provide a complete answer, we must look briefly at the order of events for a defendant in Georgia.

At your initial appearance, the judicial officer has two options. He or she may either set a bail amount at that time, or set a date for a commitment hearing at which bail will be set. If you remain silent while the judge sets bail, you waive the right to a commitment hearing. You can, however, later petition for a lower bail through your attorney.

In the state of Georgia, initial appearances usually occur in magistrate courts. So for misdemeanors, the magistrate will typically set a bail amount at that time. However, in the case of felony arrests, only superior courts have jurisdiction, so a superior court judge is the only person who can set bail for a felony offense. If your initial appearance on a felony charge occurs before a magistrate, that magistrate must then set a date for a commitment hearing. If the magistrate does not set such a date, it is essential that your attorney file a bond motion. This motion ensures that bail is set and that you have an opportunity to post bond, rather than awaiting your trial date in jail.

In cases where bail seems excessive in proportion to the offense or places an undue financial burden on the defendant, you may (through your attorney) petition the court for a reduction in bail. However, any alteration in the bail amount would be addressed at a later date and not at your initial court appearance or bail hearing.

Essentially, according to Georgia law, the person who sets your bail depends on the nature of the offense. The general rule is that bail for minor offenses can be set by a magistrate at the initial court appearance (though the magistrate can opt to set a commitment hearing at a later date for that purpose)—but bail for felony offenses must be set by a judge. We hope this information clarifies what can often be a confusing issue, and makes you a better advocate for your own defense.

Should you ever find yourself or a family member in need of a bail bondsman, please call Bond James Bond, Inc. We have 11 locations that are open 24 hours a day, 7 days a week to serve you quickly.